I prefer Games that challenge your intelligence a little. Although I have tried many of the game apps available, I prefer the Zynga Poker app for daily play. I play the play money version of Texas Hold Em. I started out with 4000 free chips and have played my way up to 10,000,000 chips. Generally, I play at least an hour a day. It’s fun and I get to play with real people from all over the world. The orientals play nearly every hand going “all in”,

but soon they loose all their chips and move on. I have found that I prefer to play on the 100/200 and 200/400 small/big blind tables. Sometimes when I get on a table with foreigners, I suspect they are telling each other what cards they have. When this happens, I just interject a “Chichi Bo Fumbee” into the conversation. Since they don’t know what this means, they start talking to each other about what I said and the game goes on. If you like poker, you can have hours of fun on the iPad with this game app. i have found that I usually play a long time if I’m on winning streak, and a short time if I’m losing. It’s a great game to entertain seniors with some extra time available. A photo of the live poker game is provided below. 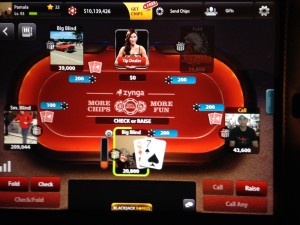 Zynga Poker on the iPad

Another game app I enjoy playing is “Words With Friends”. It is an adaptation of scrabble. It is set up so you can play with anyone who downloads the game to their device. It is basically a two person game. I have played this game with both my daughters. The only drawback to this game is that you have to wait on your opponent to play before you can proceed with your next turn. With my busy daughters, I have found that if they are ahead, they keep the game moving pretty good. But if they are behind, the game slows to a crawl. I have waited as much as seven days for them to play. So this iPad game is not a source daily enjoyment from that respect. The game can also be played with two players locally. I play with my wife passing the iPad between easy chairs. I enjoy playing with her, but she gets mad if I beat her too many games in a row. This game could be a source of real entertainment for seniors if they can find someone with as much free time as they have. Below is a photo of the Words With Friends play board. 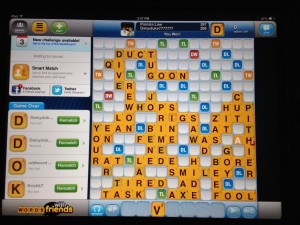 Thank you for reading iPad Games.
by Hawg Jaw Bill