In June, 1973, I was working a plant turnaround at Dumas Helium Plant. We were defrosting helium plant equipment by circulating warm dry residue gas through the piping to pick up any water or moisture left in the system as the helium plant operates at -300 degrees F. I had gone by Borger Refinery and picked up some liquid nitrogen in a large cryogenic container on my way to Dumas Helium to begin the day shift. We ran water dew points on the circulating residue gas to tell when all the water had been dried out and the plant and it was safe to start. To run the tests, we used the liquid nitrogen to cool the gas until the moisture dew point is detected in the device. When I began my shift, the engineer that was of the night shift had already gone home so I was working without knowledge of what was done before I got there. I began by filling the small liquid nitrogen thermos with the liquid nitrogen I brought with me. I started the test, but could get no flow of nitrogen. I stopped the test and removed the thermos stopper standing over the thermos. Suddenly, the entire contents of thermos erupted and blew the liquid nitrogen out into my eyes and face instantly freezing one eye and three quarters of my face. I found out later that the guy on before me had run out of liquid nitrogen and had filled the thermos with liquid methane from the cold box at the plant. When I put the liquid nitrogen in on top of the liquid methane, the liquid methane froze solid and made a methane ice bridge on top of the thermos. Thus I could get no nitrogen flow from the thermos. The methane ice bridge let go just as I removed the plug from the thermos and thus all the contents blew directly into my face. They hauled me to Amarillo to a Hospital and I was off work for about nine weeks recuperating my face and vision. Pam said when Everett (my bosses boss) called her, he talked so slow that she about peed her pants before he could get out what happened to me. I’m still not sure whose fault this was but,the guy on shift before me was  one of my best friends. Phillips made a new safety regulation that liquid methane from the cold box could no longer be used to run dew points and face shields are to be worn when running them. 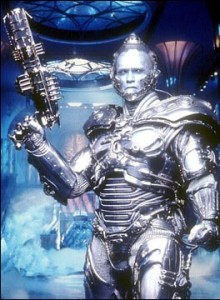 Mr Freeze got my face and eyes that day.