Perhaps, one of the best things I did in my life was getting a bachelors degree in Mechanical Engineering from Texas Tech College (it was a college then and not yet a university). In getting this degree, I lived in a college dorm for three years. At times, I had some unique experiences which I have recorded in this story.

In 1963, I graduated from Frank Phillips Junior College in Borger, Texas and headed for Texas Tech College in Lubbock, Texas. I moved into the Wells Hall Dorm and started Engineering School there, My cousin Ricky and I were roommates the first year we were there. The school assigned us a room on the third floor with a bunch of freshmen. We were coming in as Juniors. For a while things were pretty quiet in the dorms. The freshmen got to know each other pretty well and they started pranking each other. On one occasion, one guy snuck into a room and crapped right in the middle of a guys bed and made the bed over it. That guy retaliated by sneaking into the other guys room and crapping in his cowboy boot. When the victim put the boot on, he apparently didn’t notice it had crap in it. He walked around in some deep shit for a while until the smell alerted him. Can’t you imagine pulling your foot out of that boot?

On another occasion, some of the guys went down to the local newspaper and got a pickup truck full of old newspapers. They carried the newspapers to a guys room on the third floor and filled his room completely up to the ceiling with crumpled newspapers. I wasn’t there when the guy got back to his room, but the hallway was full of crumpled newspapers.

Some of the guys figured out that you could take two coke bottle lids and force them in the crack between the front of the door and the door facing above and below the lock, and the door bolt would be jammed so tight against the back of the lock that the door knob would not turn. For weeks after that we heard guys beating on the inside of their doors yelling for someone to help them get out of their rooms.

Ricky and I were older than the other guys on the floor and we were both big guys so they didn’t mess with us much. With all that went on in that dorm, it’s a wonder we ever got any studying done.

On one occasion, the guys came around beating on doors saying there was a panty raid planned for one of the girls dorms. This sounded interesting to us so we got our coats and followed the crowd. We went to the lawn on one side of a girls dorm and the guys started hollering “Panty Raid.” The girls on the upper floors opened their windows and started throwing out panties. This wasn’t at all what I expected, but I jumped in middle of the group and started fighting to get me some trophy panties. Unfortunately, I was unsuccessful. It started to snow so we went on back to our dorm.

i was laying on my bunk in my dorm room at Wells Hall at Texas Tech on November 22, 1963, when the announcement came over the radio that President John F. Kennedy had been assassinated. I shall never forget that.

Everyone needs to get a good education in these times. Not only will they secure their future, but they will have some fascinating experiences to talk about when they get older. 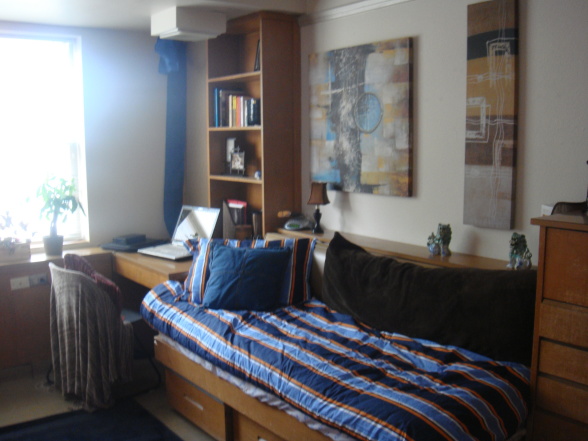 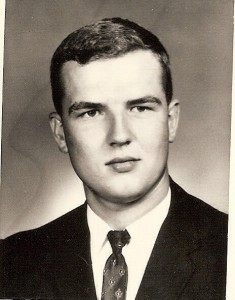 My Senior picture at Texas Tech.

Thank you for reading The Dorm,