Written with my iPad Notes App

Since I love to write and the Notes pad on the iPad is so easy to use from my recliner, I thought I’d revisit Notes in “iPad Notes App Part 2”. I use Notes to write all my emails because it is so easy. I write the email notes and edit them for mistakes in Notes. Then I hit the small square with the arrow pointing up at the top of the page. I select mail and the note goes into email format ready to add “to” addresses and “cc” addresses. So I send all my emails in a very comfortable position. I know many of you seniors out there have a lot of memories you may want to preserve for future generations of your family. I have prepared a series of true short stories in Notes and sent them out to members of my family. This may help preserve your legacy and it is very fun. I wrote the stories in Notes and sent them out in emails as discussed above. Here’s an example true story I sent out earlier.

“The Cannibals”
“In July, 1990, I was heading a team of Engineers on a trip to Papua, New Guinea, to locate possible plant sites for a Liquefied Natural Gas Plant being planned on a Company project. We had arrived and I had booked a helicopter to fly us around the inner coast of the Country. We located a couple of good looking sites and we decided to land the helicopter and view the sites on the ground. We got out of the chopper in the jungle and the helicopter left to go refuel. About the time he got out of site, hundreds of little black men with very long knifes began coming out of the jungle all around us and began slowly closing the circle around us. My hair was standing on end as they got closer and closer. I could see my shrunken head on a stick while my body stewed in a large pot as they approached. We were virtually face to face with these guys and one of the little guys said in a distinctive Australian dialect,”What are you chaps doing here?”As we let out a large sigh of relief, we told them we were looking for a possible plant site. We took some pictures and the little black guys disappeared and about fifty naked black kids flocked in around us and followed us until the helicopter picked us up. We flew around the rest of the coast and saw some giant sting rays and giant whale sharks in the crystal blue waters surrounding the coast.”

The naked kids that followed us around. 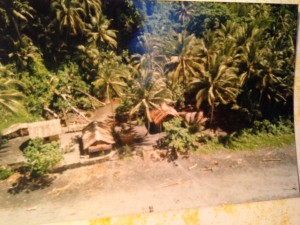 Native village in the jungles of Papua, New Guinea 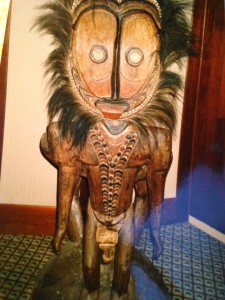 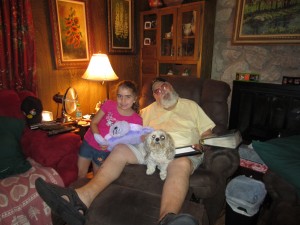 Me, my iPad and Some of my Loved Ones

Thank you for reading The Cannibals.
by Hawg Jaw Bill