I’ve tried many of the iPad radio apps and I prefer Pandora over the others. The app is free so you get a few advertisements with the music. The advertisements are not excessive. You can eliminate the advertisements if you choose to purchase the app for a small fee. I like mostly old classic country and older rock music. Pandora allows you to select your favorite artist such as “George Jones Radio” and it will play songs from that artist and other artists with similar style.I have found the selection of music played to be very good. A nice write up is provided on the app which gives some historical information on the artist as the songs play. There is a feature which allows you shuffle your radio artist picks in random order if desired. I usually keep about twelve different artists radio “stations” and change them occasionally. Before I tried the Spotify app, I enjoyed this music directly from the iPad, streamed to TV speakers through Apple TV and streamed to my Bluetooth speaker systems. The only thing I don’t like about radio is that you can’t select the exact songs you want to hear. I prefer to make my own play lists of the exact songs I want to hear and in the order I want to hear them. Below is a photo of my Pandora app page illustrating the app.as it appears playing music. 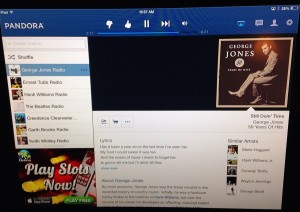 I have loved music all my life. I started collecting 45rpm records and 33 1/3 rpm records when I was 30 years old and collected them until I retired. I recorded on the order of 200 eighty minute CD’s (about 25 songs per CD) from individual songs off the records over that time period. For each CD recorded, It took me on the order of two hours to dig the songs out of the records, one and a half hours to make the recording, and another half hour to put the records back up. So I ended up with about four hours of my time in each recording, but I had the exact songs in the preferred order I wanted them. During the latter portion of the time period I was buying a lot of prerecorded CDs and recording individual songs from them. I was spending at least a hundred dollars a month to get the CDs to make the recordings and I had to have a decent CD player, recorder, and quality speakers to get the sound I wanted.

Then I discovered the Spotify App on the iPad. Spotify gives you access to millions of songs from most of the artists that ever recorded. I can put a playlist of 25 songs together of the exact songs in the exact order I want them in about thirty minutes. And I can do it from my easy chair while watching TV. For an old guy, this was like coming from the dark ages into the future. There is a small fee of ten dollars a month required to use the playlist feature of Spotify, but I was spending ten times that on CDs alone. So I’m saving money and enjoying all the music I want with just a tap on the iPad. It’s great.

I have set up Bluetooth speakers in my den, my bedroom, and my living room so I can steam music to them from my iPad Spotify App and listen to music where I spend my time. I also have have two big screen TVs I can stream music to through the Apple TV while watching my iCloud photos. Life is sweet thanks to my iPad. So far I haven’t scratched or broken a single playlist, so I get quality music each time I play them.

With the Spotify App, you have the option to download each song on the playlists to your iPad. This is nice because then you don’t have to have Wi Fi available to listen to your music. I purchased a $60 portable Bluetooth speaker and I can listen to my music anywhere any time. It sounds great.

Currently, I have 60 playlists with 20 to 75 songs per playlist. I add some and remove some weekly. The iPad has again provided me with pure enjoyment. I love putting the playlists together as much as I do listening to the music. Get into this stuff and all you seniors out there will have a ball. It’s so easy and fun.

Below is a photo of my iPad screen showing a part of one of my playlists on Spotify. 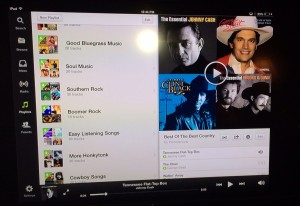 Thanks for reading Music Apps.