Occasionally, conditions are right for a one of a lifetime adventure which we never forget. When this happens, don’t miss your opportunity. This happened to my cousin Rick and I thanks to a friend of ours named John. Here’s the adventure.

In the spring of 1967, I was a single engineer for Phillips Petroleum Company in Borger, Texas. I received a call from John who had gone to college with me at Texas Tech College. John had a nickname he earned in College which was Puss. It doesn’t seem right to call him John, but I’ll do my best to give him the respect he deserves. John had received a degree in Chemistry and had received a job in Connecticut. He was now living there single in an apartment. John proposed that my cousin Rick and myself fly up there and go to the Expo 67 Worlds Fair with him. I talked to Rick who was a single engineer working for the Texaco Refinery in Amarillo, Texas. We both had been working a year in June so we had vacation coming then so we decided to make the trip. We bought plane tickets from Amarillo to Newark, New Jersey, in June and John met us at the airport with his car. We drove over to somewhere on the coast and had a lobster dinner. We got to choose our own lobster and it turned out to be the finest lobster I had ever eaten. It may have been the only one I had ever had, come to think about it. We then drove to John’s apartment and spent the night.

The next morning, we drove to the Canadian border and on into Montreal, Quebec, Canada, John had rented us a small room in a bed and breakfast in Montreal. It was kind of small but OK for three single guys. We spent the next five days checking out the Worlds Fair from top to bottom. It was phenomenal. I liked the U S Pavilion which was a 3/4 geodesic dome. 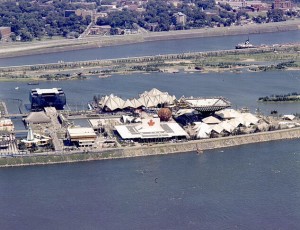 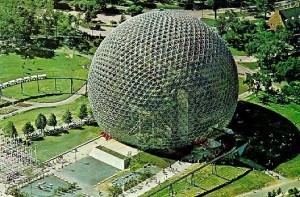 The United States Pavilion at Expo 67. If you look closely you can see John, Rick, And I coming out of the Pavilion. 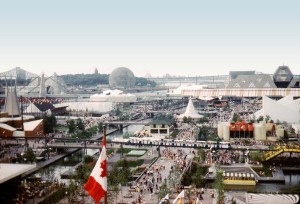 Another view of  Expo 67. We’re riding on that overhead tram. Look closely and you can see Rick waving.

While we were there we stopped at one of those guys that does characature drawings and we all got drawing to bring home. I’ve still got mine buried somewhere in our archives. Everyday we tried food from a different country and saw a lot of interesting futuristic exhibitions. It was quite an adventure and my first exposure to International travel. Everyone should try a Worlds Fair if one ever gets close enough it’s well worth it. Expo 67 was reported to be the most successful Worlds Fair in the Twentieth Century. 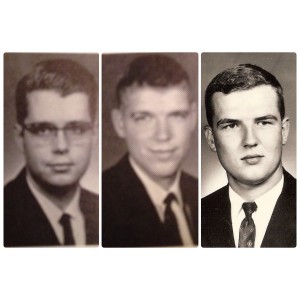 John, Rick, and Bill, the traveling troubadours that decended on the Worlds Fair Expo 67 in Montreal, Quebec.

John dropped Rick and I off at the airport and we flew back to Amarillo and went back to work. Not too long after that, John got married and ruined our connection to the east coast for single guy activities.