Young men are always looking for new things to do to try to make life more interesting. Here’s something every young man should try at least once to test your standing as a beer drinker.

In 1967, I was single and lived in at apartment on McGee street in Borger, Texas with two single roommates named Bob and Rocky. (refer to previous blog The Bar Fight)  I came home from work one Friday night and they were getting ready to drink some beer. Rocky had heard from some of his friends that if you drink a one ounce jigger of beer every minute that 9 out of 10 beer drinkers would barf before they reached 60 minutes. That’s five 12 ounce beers in a hour. Well we were seasoned beer drinkers and we didn’t believe that so we decided to give it a try. Bob decided to go first so we got a one ounce jigger and started pouring and timing. Of course Rocky and I were drinking beer the normal the way while Bob was doing the test. Bob got to 38 ounces and ran to the bathroom and barfed . We couldn’t believe it. Rocky went next and he got to 52 before he ran to the bathroom. I went next and I made it all the way to 60, but it felt like it may come up any second. We figured that when you drink beer 1 ounce at a time like that, you get so much bubbling that it fills your stomach with gas and eventually lifts the beer out of your stomach and you barf. After the test, we all went down to the Rendezvous Room in the basement of the Borger Hotel and did some normal beer drinking for the rest of the evening. 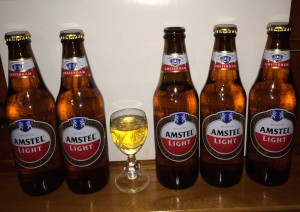 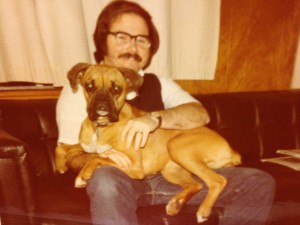 Wild man Rocky about 5 years after we were roommates.

*Drink responsibly.  The owner of this site, a.k.a. Hawg Jaw Bill, is not liable for injury or death of any person(s) or animal(s) as a result of drinking beer shots.