Perhaps the heads on my toons have grown a little,
So I’ll call my recollections Fatheads for this transmittal.
So here are the Fathead toons that came to my mind,
During this October when my pen and pad I did find.

“Rodney” is a great Forest Ranger like I wanted to be,
His mission today is to plant wild flower seeds freely,
Over the tall grass prairie to help feed prairie chickens,
Keeping them fat and healthy with all the good pickin’s. 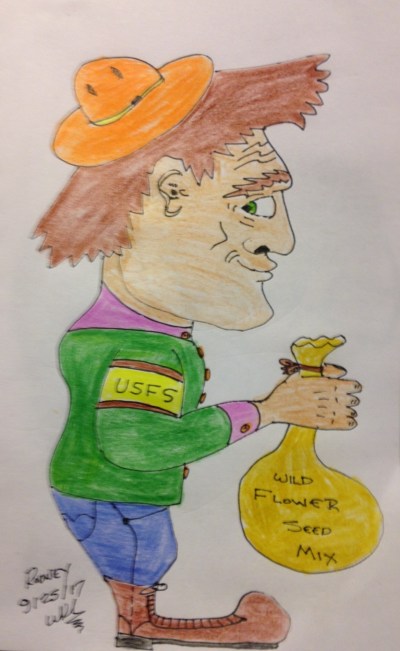 “Big Ben” is a fine football player that I love to see play,
Because he is my grandson now finding his own way,
As he plays that game of football blocking so fine,
So the team runners make their touchdowns on time. 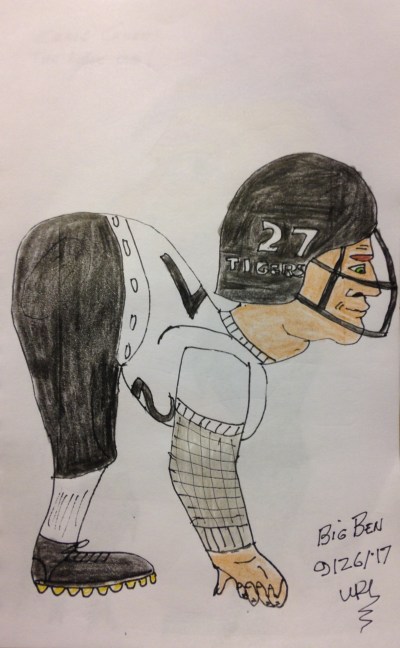 “River Runner” is a fisherman out in a mountain river,
With two fish he caught and one caught by his brother.
Hey, that could be me out there as my brother is Craig,
Who also always caught the little one laying an egg. 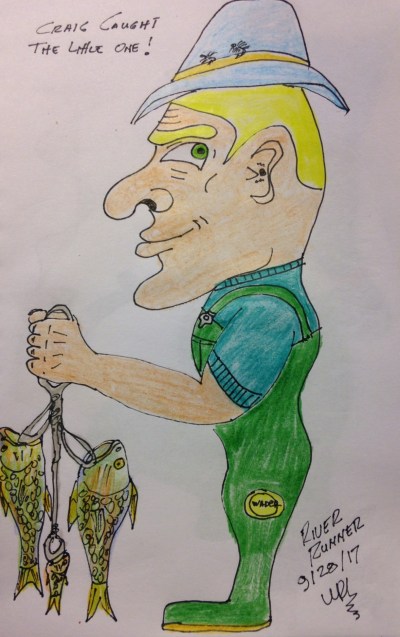 “Chan” is a Chinese man smoking a very fancy pipe,
I recalled one guy, Charlie Chan, a detective type.
Maybe he can figure out just what’s in that little pot,
That is about halfway down on that fancy pipe top. 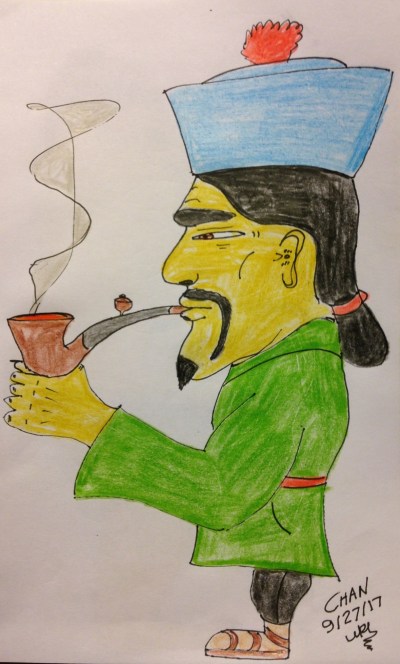 When I stayed there in Japan, I went out to see “Sumo Joe”,
I enjoyed all the sights all day while there in Tokyo,
Then went out to see big Sumo Wrestlers that night,
I must admit heavy Sumo guys put up a good fight. 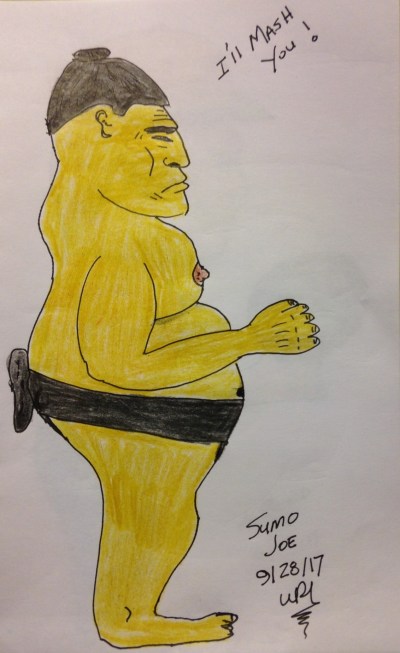 “Mr Record Man” could be Hawg Jaw a few years back,
When I collected 45 rpm records with long vinyl tracks.
He’s even wearing a hat like Pam just bought me,
With a sign on the front saying “The Tallgrass Prairie.” 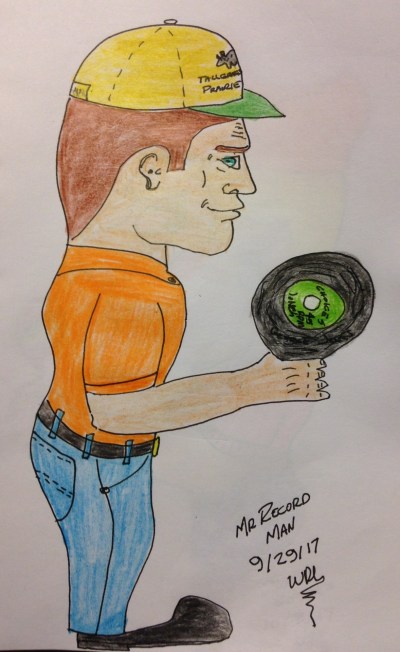 “Sweet Cheeks” is a guy I remember from high school,
Who sometimes kind of acted like a big plump fool.
Using that eyelash pencil on his long black eye lashes,
With those round rosy cheeks and his girly flashes. 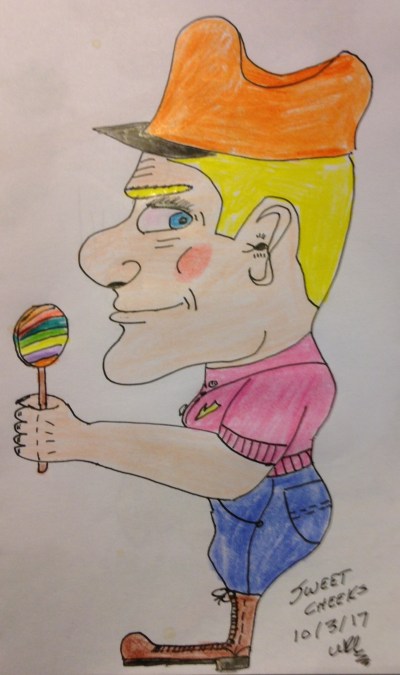 “Vernon” is a student I knew down at Texas Tech,
Who often wore a long red hoody looking like heck,
He always told a good story about catching rattlesnakes,
But I suspected his stories in his mind he did make. 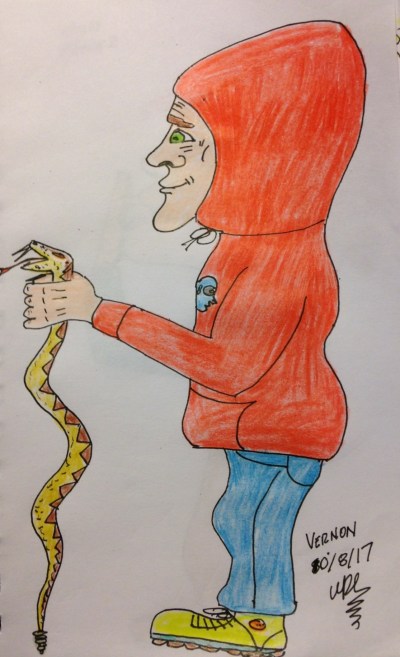 “Angel” is a very good man having a talk with the Lord,
From the expression on his face, his mind has soared,
Reaching an internal high point as his halo does glow,
Knowing that his goodness will make his spirit grow. 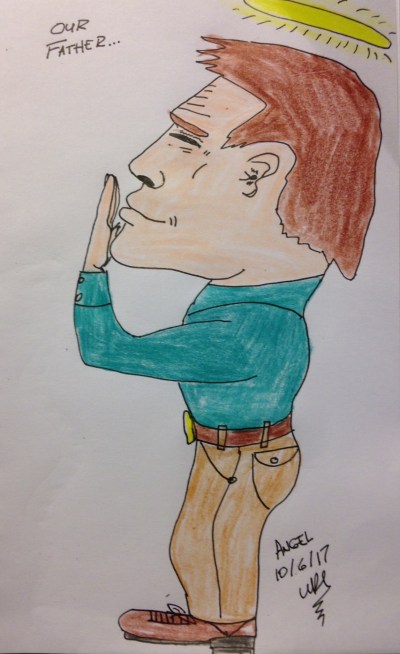 “Punky” has been called to duty by his little wife,
To clean webs from the corner and end spider’s life.
The little woman handed him a long feathered fluff,
To squash the spider and clean up the web stuff. 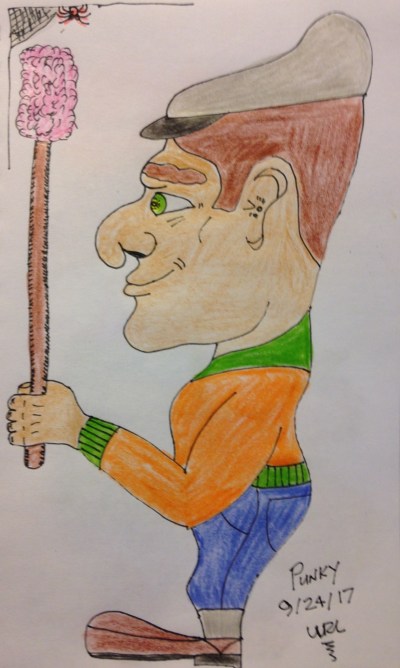 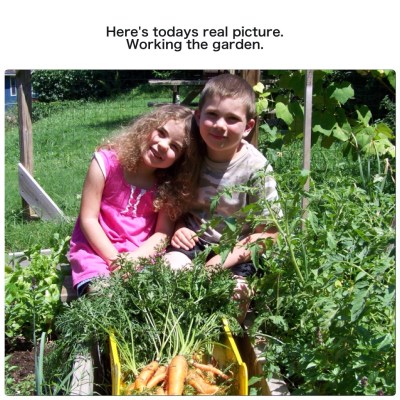 Thanks for reading Fathead toons,
Bill